Ch. 4: – From Consolidation to Failure 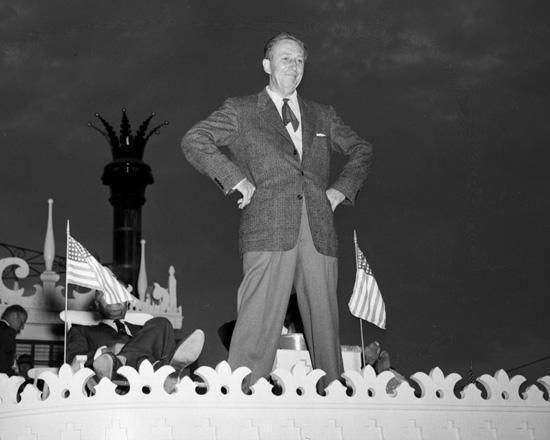 Disneyland opened in 1955, one decade before WDP acquired the theme park. At this time, WDP owned an approximately 34% stake in the park’s management company, Disneyland Inc. Additionally, WDP functioned as the parent owner of Walt Disney’s startup and autonomous subsidiary, WED Enterprises.

Soon after Disneyland opened its gate to the public in the summer of 1955, executives at WDP pursued a plan to begin reworking the firm’s joint tenancy of Disneyland’s operating company, Disneyland Inc. In 1958, WDP agreed to a deal with ABC to buy the company’s share of Disneyland Inc. While negotiating with the American Broadcast Company, WDP also purchased shares from the remaining joint tenant, Western Printing and Lithographing.

WDP’s move to consolidate ownership of the joint tenancy arrangement of Disneyland Inc.[1] occurred when WED Enterprises (more commonly known as Disney Imagineering by 1957) was involved with several architectural alterations, new building construction, and changes to existing attractions inside Disneyland.

Additionally, the rearranging of the terms of joint tenancy occurred in conjunction with a management overhaul at Disneyland Inc. First, C.V. Wood was fired from his position as General Manager of Disneyland and Vice President of Disneyland Inc.[2]

The trouble between Walt Disney and Wood, Disneyland’s first hire and first fire, ended less smoothly than the owners of Disneyland Inc. hoped. Rather than stay and continue to the end of his contract, Wood left shortly after hearing the official word of his firing. Though Wood and Walt never got along and personal conflicts got in the way of several management decisions, which caused operational issues for the theme park itself, Disneyland lost—rather abruptly—its first General Manager.

The following year, WDP purchased additional stock in Disneyland Inc., then approximately a 68% owner of the jointly held company.

The sale transferred ABC’s stock in Disneyland Inc. to WDP for cash, and the terms of the deal were critical for WDP’s next consolidation move. Because, even under new parent company ownership, Disneyland Inc. would remain responsible for its old business, including its debt to creditors.

Cash payments to ABC were part of WDP’s strategy to limit the cost of purchasing Disneyland Inc. WDP’s deal with ABC bled Disneyland Inc., making the company’s eventual purchase of Disneyland Inc. a reportable loss. Despite the immediate hit to revenue, at the end of the five-year payment period, shares of WDP stock rose from 94 cents to $1.56. The price of shares in 1965 continued to grow alongside revenue increases from film sales, royalty payments, merchandising, and theme park business.

The decision to bleed Disneyland Inc.’s coffers of cash in the deal with ABC was ultimately an attempt to limit the firm’s tax burden and consolidate ownership of Disneyland Inc. at a lower cost. Still, it was part of a company strategy to limit expenses more generally regarding acquiring Disneyland and to begin seamlessly integrating the promotions film and television business throughout Disneyland. Because while the animation and film company negotiated with ABC, WDP also gained a majority share of their subsidiary, WED Enterprises. Buying Walt Disney’s Imagineering startup proved more complicated for WDP than arranging with ABC for a buyout to restructure the existing joint tenancy of Disneyland Inc. The Imagineers delayed the final deal to buy WED Enterprises and move Imagineering in-house at the WDP studio to negotiate terms of their employment, including royalties and the rights to various in-park designs and new ride technologies.

Excerpt from Chapter Four: From Consolidation to Failure